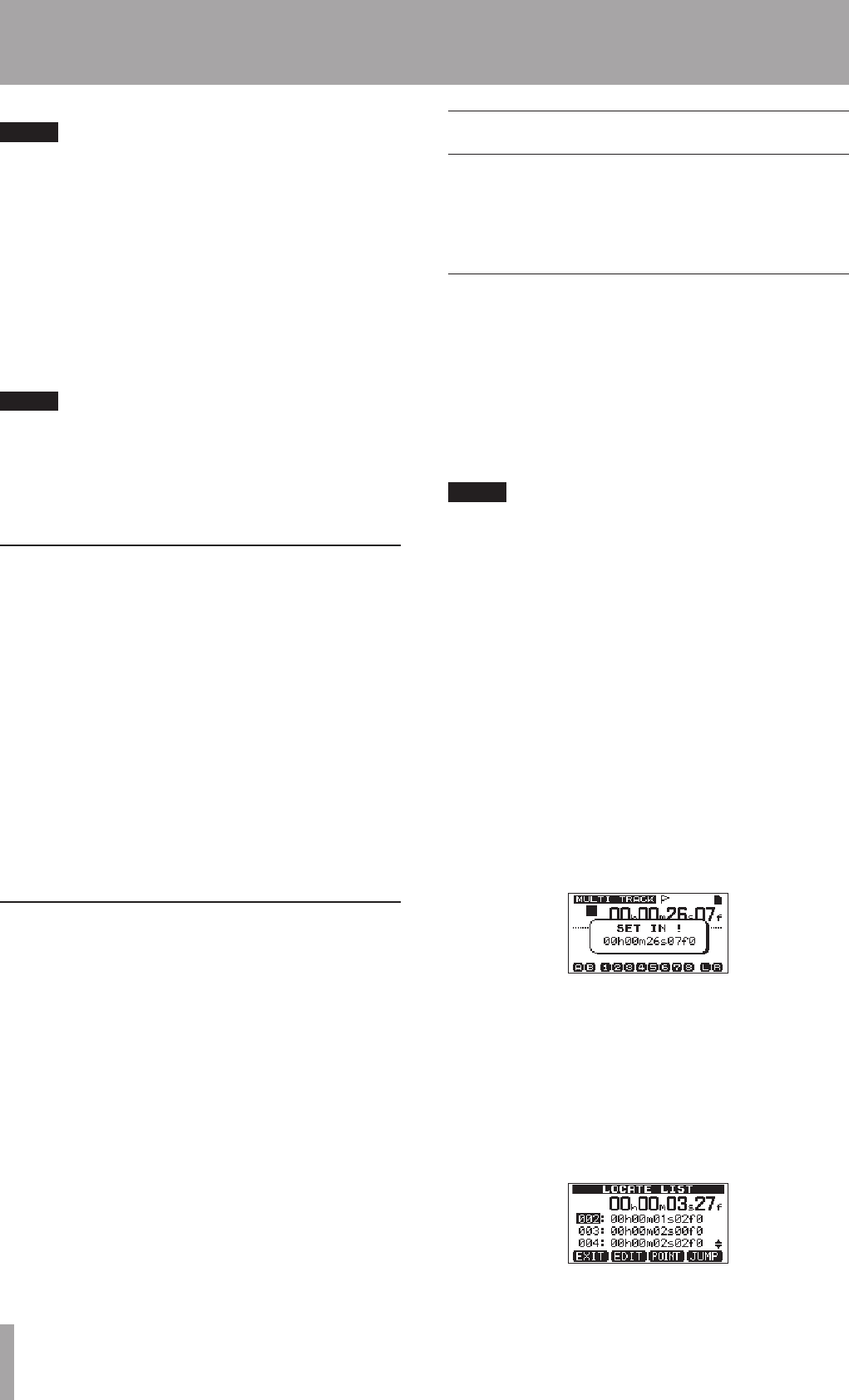 46 TASCAM DP-03
NOTE
The marks are shown in the order they appear in the song,
not by number.
3 Use the F3 () and F4 () buttons to move the
cursor between time fields.
4 Turn the DATA wheel to change the value above the
cursor. When adjusting, the value will carry over
automatically when it reaches the highest or lowest
value in a field. For example, when turning the
DATA wheel to increase the value in the seconds
field, the number will change from 59 to 0 and the
minutes value will increase by one.
NOTE
You can’t move a mark forward past the next mark in the
list, or backwards to before the previous mark in the list.
5 After you have finished editing, press the F1 (
EXIT
)
button to confirm the edited value and return to
the
LOCATE LIST
screen.
Return To Zero (TO ZERO) and Last
Recording Position (TO LAST REC)
Use simple button operations to return to the top of a
song or to the position where recording last started.
Return to the zero point (song beginning at
00:00:00:00)
Press the REW (Ô) (TO ZERO) button while pressing
and holding the STOP (ª) button. (TO ZERO function)
Last Recording Position (the position recording last
started)
Press the F FWD () (TO LAST REC) button while
pressing and holding the STOP (ª) button.
This function is useful when you want to record the same
passage again.
Fast forward/rewind search
Press the REW (Ô) (TO ZERO) or F FWD () (TO
LAST REC) button when stopped to rewind or fast
forward, respectively.
Each time you press one of these keys, the speed increases
from 10x to 50x, 100x and 1000x.
Press these buttons during playback to search backward
or forward while pressing. The search speed is fixed at 10
times normal playback speed.
Repeat playback
Use the repeat playback function to play the same part
again and again.
The repeated passage is time between the IN and OUT
points.
Using IN, OUT and TO points
In addition to setting the repeat playback interval, the
IN and OUT points are also used to set track editing
intervals and as the punch in and punch out points when
automatically punching in and out. Moreover, these
points are used as the starting and ending points when
creating a master track.
You can set these points during recording, playback or
when the unit is stopped.
NOTE
The IN, OUT and TO points cannot be set or edited at the
following times.
During repeat playback
•
When in automatic punch in and out mode
•
When the recorder is in MIXDOWN or MASTERING
•
mode
When the
•
LOCATE LIST
or
I/O SETTING
screen
is open
Setting IN, OUT and TO points
Regardless of whether the unit is stopped, playing back
or recording, you can set these points at the positions you
like by pressing and holding the IN [SET IN], OUT [SET
OUT] or TO [SET TO] button. The corresponding IN, OUT
or TO point is set at the time when you began pressing
and holding the button, and the time set appears below
a pop-up message (
SET IN !
,
SET OUT !
or
SET
TO !
as appropriate).
SET IN pop-up message
Locating to IN, OUT and TO points
Regardless of whether the unit is stopped or playing back,
you can press the IN [SET IN], OUT [SET OUT] or TO [SET
TO] button to locate the corresponding point.
You can also use the
I/O SETTING
screen to locate.
1 Press the LOCATE LIST [LOCATE SET] button to
open a list of location marks.
7 – Recorder Functions
previous next