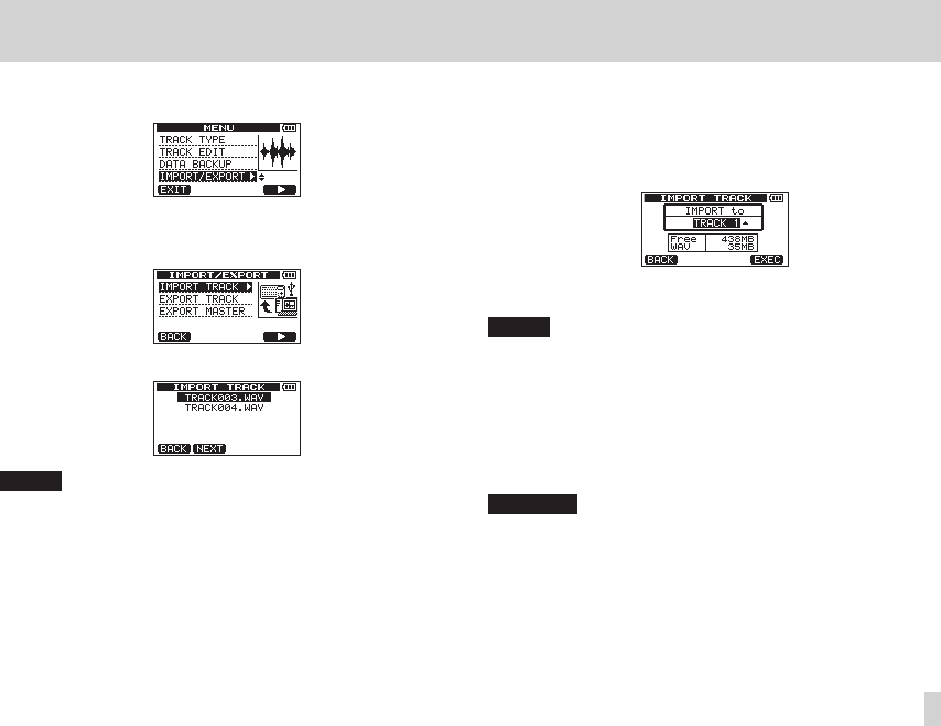 TASCAM DP-006
89
12 – Exchanging Data with a Computer
5. Use the DATA wheel to select (highlight) the
IMPORT/EXPORT
item,
and press the F4 [t] button to open the
IMPORT/EXPORT
screen.
IMPORT/EXPORT
screen appears.
6. Use the DATA wheel to select (highlight) the
IMPORT TRACK
item,
and press the F4 [t] button.
Song files on the FAT partition are shown.
NOTE
•
This unit does not support WAV files with sampling frequencies other than
44.1 kHz. Such files are not displayed even if they have been imported. If
no files that can be imported are on the FAT partition, an
Import File
Not Found
pop-up message appears.
•
If the file name is short, spaces appear after the file name on the FAT
partition, but those spaces are not included in the actual file name.
7. Use the DATA wheel to select the WAV file that you want to import, and
press the F2 [NEXT] button.
The amount of open space on the MTR partition and the size of the
selected WAV file appear on the display.
If the WAV file is stereo, this unit automatically selects two mono tracks
(TRACK 1 and 2) or a stereo track (TRACK 3 or TRACK 4).
8. Use the DATA wheel to select the track to which you want to import the
WAV file, and press the F4 [EXEC] button to start importing.
NOTE
•
If there is not enough open space, an
Import File Too Large
(the
file to be imported is too large) warning pop-up message appears.
•
The track that is the destination for the import must be empty. This unit
reads the file from the FAT partition, and imports it to the designated track.
The beginning of the file is set at the start of the song (00h00m00s00f).
In the same way as other recording tracks, you can edit the track that has
received the imported file. (See “8 – Editing Tracks” on page 67.)
•
When importing stereo WAV files, it is necessary to have an open pair of
tracks or a stereo track.
CAUTION
After importing a file to TRACK 3 or 4, if the track type has been changed
from stereo to mono or mono to stereo, any file that has been imported to
this track previously will be deleted. This operation can be undone.
9. When done importing, press the HOME button to return to the Home
Screen.
previous next